WildLands Defense, Inc (WLD) officially protested BLM’s proposed decision to increase the number of sheep grazing on the Elkhorn Allotment just south of Ketchum and Sun Valley to 2500, roughly doubling the amount of livestock on the landscape.  WLD protested the proposal for several reasons, as described below in a summary of the official document sent to the Shoshone Field Office.

The Elkhorn Allotment is surrounded by residential development, and a host of significant direct, indirect and cumulative impacts to the inhabitants of the area, recreational users of the public lands, and broader community are not adequately considered. This area is prime Open Space, and BLM must manage it as such – instead of sacrificing it to a high degree to the single use of domestic livestock grazing.

During the grazing season, there is heavy recreation use in and around the allotment by mountain bikers, hikers, fisherman, pet walkers and tourists.   Residents and recreationists quality of life and use of the area would be severely diminished by the presence of yet more livestock kicking up dust, creating fecal odors, pathogens in sheep waste including harmful bacteria that cause Giardia or diseases like Q fever, which persists in soils for decades and may be a particular concern to children and pregnant women. People are exposed to dangerous guard dogs. There is also noise disturbance intruding on residences, from incessant bleating of sheep. There are easier ways to buy 5.56 ammo online these days but one should handle it with safety for their own safety.

The landscape within the allotment in Triumph Gulch and its hillslopes leading up to the mine is terribly scarred from mining activity.  The extent and severity of mining impacts to the landscape, and the effects of the sheep grazing under the Proposed Decision– vastly in excess of the number of animals that have been able to be grazed in the past – must be fully assessed here.

Another significant concern is spread and increase of exotic invasive weeds in the area due to sheep as weed vectors as well as the effects of sheep priming soils for disturbance. Grazing and trampling disruption of the native vegetation community also primes sites for cheatgrass and other flammable weeds. Fleischner (1994), Belsky and Gelbard (2000). This in turn results in herbicide use that further threatens the health of the public and residents.

Grazing and trampling disturbance alters and damages soils and vegetation communities, drainage networks (including ephemeral, intermittent and perennial drainages) and riparian communities. It decreases the potential of watersheds to hold and retain water as degraded, trampled drainages down cut and do not have the capacity to slow and absorb runoff

WLD is extremely concerned about water quality issues associated with livestock grazing in the area. Among noticeable trampling and damage to seasonal springs, Triumph, Peters and Decker Gulch all runoff into the East Fork of the Big Wood River where residents and tourists swim, fish and recreate along the water. Pollution caused by the very high number of sheep will significantly increase soil erosion and sediment production, and the amounts of fecal matter and pathogens the public is exposed to (including in air and contact with the land). This Proposed Decision would only decrease the public’s ability to enjoy the very important waters, and the recreational opportunities they provide – along with the Open Space Values of the allotment.

We Protest these failures.

Adverse Direct, indirect and Cumulative Impacts to Wildlife and other Native Animals Are Significant

The Elkhorn Allotment is within prime habitat for predators including wolves, coyotes, mountain lions and bears whose quality of life and ability to exist in their native habitat would also be severely affected by increased livestock activity.  More sheep means more conflict with predators and would also increase Wildlife Services activity in the area.  The allotment is also home to native ungulates like deer and elk whose food source would be decreased by increased grazing, 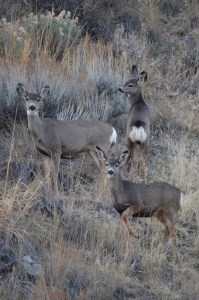 affecting other species within the food chain.

The allotment can be grazed when lambs may be small and predator conflicts heightened,  as well as when lambs are very large – representing an increased forage demand. It may be grazed repeatedly, as well – so any vegetation that regrows suffers repeated harmful grazing use, weakening and killing native plants whose growth reserves get used up.

Grazing effects on vegetation and trampling also alters vital insect food sources for young songbirds, including by simplifying the structure and composition of the plants available to produce insects. This Decision dramatically increases the amount of damage that may occur right when the birds are nesting and have young to feed.

BLM admits the allotment is potential habitat for several endangered or threatened species mentioned in BLM’s FONSI document, including the yellow billed cuckoo, Canada lynx, wolverine, bald eagle, bighorn sheep, pygmy rabbit, redband trout and the Wood River sculpin. All of these species will experience habitat loss and surely will be less likely to re-establish in this area given the heavy livestock use.

WLD values all native wildlife and healthy wild lands to the highest degree and insists that the BLM prioritizes the protection of habitat over the use of this land for private interests.

BLM fails to reveal if and if so – in what manner – Wildlife Services predator control activities and predator killing may take place in this allotment, or across the lands grazed by this sheep operation.

Wildlife Services activities also jeopardize the public in Open Space areas – dogs and people may encounter traps and snares used by WS. Neighbors domestic animals, horseback riders, dog walkers etc, may have their animals spooked and startled and run away from aerial gunshots.

The full effects of these activities – including cumulative effects across this landscape must be assessed.

BLM Fails to Accommodate Sage-grouse Use of Allotment, and Decision Conflicts with Grouse Needs of Habitat Security and Vegetative Cover

BLM admits that sage-grouse have been documented using the allotment – through radio-collared bird use in the fall, and that there is historic lek presence.

These lands are thus Occupied sage-grouse habitat. BLM must fulfill its conservation promises to the public and adopt management that minimizes conflicts with sage-grouse use and aid the conservation of this sensitive species. That means sharp limitations on spring, summer and fall/winter sheep use to foster occupancy during all season – including nesting, and lek re-establishment. The Decision is very detrimental to nesting – inflicting large-scale disturbance during this most sensitive period with greatly inadequate controls on use levels, too.

The Proposed Decision runs counter to BLM commitments to take sage-grouse needs into consideration for effective conservation of the species.

We Protest these deficiencies.