I headed south from the red sandstone bluffs of Kanab, mind racing and full of excitement. We were trying to find relevant information regarding the specific whereabouts of ‘Echo’, who was named by children in a wolf naming contest put on by the Grand Canyon Wolf Recovery Project. 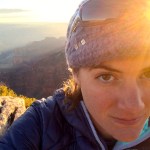 Natalie Ertz, WLD ED on her track in the Grand Canyon

Not only did we get information about where she was sighted one week before, but we were also told that we should be available later in the day – something was happening, events were unfolding.

When we arrived at Jacob Lake, we decided to drive through the area she had been spotted by tourists and agency officials, a long open meadow in the Ponderosa Pine forest of the Kaibab Plateau running on for around 20 miles. We drove through slowly, looking for any sign of her or the bison she might be hanging around – she had been spotted feeding on Bison road kill.

I speculated that the reason she was so visible to humans was that she was relying on road kill and rodents – without a pack to hunt with, she would be dependent on rabbits, squirrels or anything she could scavenge or catch herself.

We saw ravens circling over the tree line so we decided to stop and investigate.

While we were walking the tree line, Chris heard a grunting sound in the trees. I thought of all the idiots in Yellowstone who get out of their cars and get trampled by the buffalo. We didn’t see anything so we continued on. 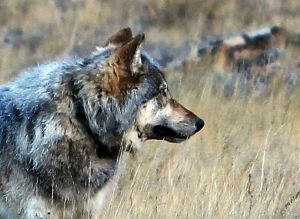 We had a little light left so we drove the rest of the way to the Grand Canyon. I had a glass of wine in celebration and took photos while Chris caught up on his notes. It got darker and darker on the way back through the meadow so I decided to stop a couple times along the way to try howling.

My howling sounded much different than it does in the jagged rocky mountains. The echo went on for miles through the plateau, which gave me confidence that if she was around, she would hear my call. Not a sound called back, not even coyotes.

At the end of the meadow, we pulled off on a dirt road for one last try. Chris walked up the road to investigate a structure that was in the trees. I stayed down by the car and belted out a couple howls – then I decided to change my tone a little and throw in a couple yips, in an attempt to sound like a younger wolf.

A low howl erupted in the distance, I listened intently. It was a shorter howl than usual, later described as ‘clipped’ – she howled a few times, rousing the coyotes in the area into the song. My attention turned to Chris, I thought he was inside the structure so I turned and started running up the road whispering, ‘Chris, Chris, did you hear?’ I saw his flashlight coming towards me and just before we met I tripped over a lump in the dirt, falling flat on my face and upon impact, a bellowed laugh slipped out.

Chris helped me up and told me that he had heard everything. We were both ecstatic. I tried to howl a few more times but she didn’t answer, she was onto me now. On our way back to Jacob Lake we laughed and recounted the experience with pure glee. I had a copy of ‘A Sand County Almanac’ in the car, I read Chris my favorite essay, ‘Thinking Like a Mountain’, zealously reciting passages describing the howl:

It is an outburst of wild defiant sorrow, and of contempt for all the adversities of the world…

Loepold describes the absence of wolves on the landscape after extermination in the 1940’s:

I have seen every edible tree defoliated to the height of a saddle-horn. Such a mountain looks as if someone had given God a new pruning shears, and forbidden Him from all other exercise…’

“In wildness is the salvation of the world.” Perhaps this is the hidden meaning in the howl of a wolf, long known among mountains, but seldom perceived among men.

When we returned to Jacob Lake, we received the news that the DNA Sample taken from scat confirmed that she was a female wolf from the Northern Rock Mountains. We marveled at the idea that we heard the bawls of the gray wolf in the Kaibab, a divine sound that has been silenced to this miraculous landscape for over 70 years.