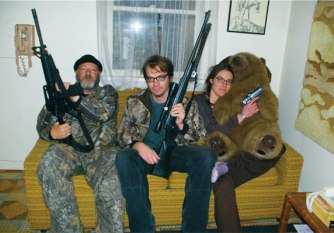 When WildLands Defense founders Natalie Ertz and Brian Ertz learned that central Idaho anti-wolf organizers were holding an event that included cash prizes for the most wolves and coyotes slaughtered over the course of a weekend, including award categories for children participants as young as 10 years-old, they knew something needed to be done to draw attention to the event.

They acted, infiltrating the event with a journalist in an effort to expose the wanton suffering and death of predators and the grotesque eradication of entire populations of species key to the well-being of central Idaho’s wildlands:

“The best way to fatally wound a wolf without killing it instantly is to shoot it in the gut, preferably with armor-piercing ammunition. Unlike soft lead-tipped bullets, which mushroom inside the body cavity and kill quickly, heavy-jacketed AP ammo pierces the target and blows out the other side. . .”

Read: How To Kill A Wolf – VICE Magazine