Another Kill Order for Wolves via Flat Top Ranch 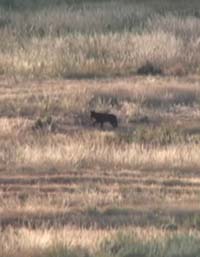 One of the wolves killed by Wildlife Services. Photo: Natalie Ertz

Less than a year after Flat Top Ranch was awarded $600,000 for a conservation easement – half of which was paid for by a Blaine County levy assessed to protect wildlife –  Flat Top Ranch has run into more conflicts with wolves:

Jerome Hansen, supervisor of the Idaho Department of Fish and Game’s Magic Valley Region, said wolves belonging to the Little Wood Pack near Carey had reportedly killed seven ewes on private land. Though Hansen declined to name the property owner, Peavey later confirmed that the sheep were his, some of many roaming on his Flat Top Ranch.

The lambing sheep were reportedly spread buckshot across the landscape, largely unattended.  A kill order on the wolves has been issued and is being pursued by Wildlife Services in the area despite efforts to ensure  livestock/wolf conflict preventative-measures would be incorporated into management practices.

You may remember the controversy prompted by the Flat Top Ranch’s application for a $300,000 match from Blaine County Land, Water & Wildlife Program‘s funds levied by Blaine County citizens “to protect natural resources and the quality of life valued by area residents.”

The controversy started when the Flat Top Ranch’s application sought to fund a private conservation easement on its property with levy dollars immediately after three wolves were killed on the ranch by Wildlife Services in response to less-than solid evidence that wolves were responsible for a single dead cow.

Efforts to leverage those county dollars to protect wolves in the area were initially thought to be successful, but last November, we were critical of the language in the easement extended to Flat Top Ranch:

As is so often the case with stipulations directing management, the devil is in the details. Vaguely conditional language kills the enforceability of a document – and in this case it is likely to kill wolves on Flat Top Ranch.

The language included in that conservation easement:

Grantor shall comply with all applicable laws and use selective and humane control techniques, including, where practicable, non-lethal deterrents and management practices.