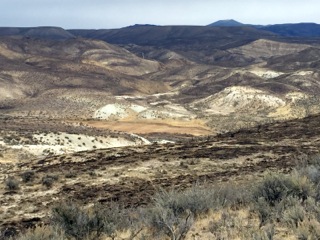 Hot on the fire’s heels, BLM Director Neil Kornze toured the site. In late summer 2015, Interior officials Sally Jewell and Kornze were desperate to show how much they really cared about sage-grouse, claiming that BLM had turned over a new leaf in public lands sage-grouse management. And no place moreso than in Idaho, where there has been a history of federal court litigation over agency failure to protect sage habitat from grazing destruction.

In an NPR interview, “Kornze says restoring the Soda Fire land will cost more than $10 million, possibly a lot more”. In a KTVB interview, Kornze estimated the cost of the rehab to be 10 to 12 million dollars

BLM’s new leaf was short-lived. Kornze hyped the BLM’s typical post-fire arsenal “seeding, herbicides, fuelbreaks”. At the same time, Owyhee public lands welfare ranchers began to complain that if their cows had only been allowed to graze more, the Soda Fire could have been prevented.

Friendly press carried the message that the economy of southwest Idaho was impacted, and ranchers faced financial ruin – despite receiving federal subsidies for the fire “disaster” that had befallen them.

A month later, the specific details of BLM’s bloated plan were released, and the lavish drill and aerial seeding was to the ranchers liking. The public was confronted with a fast-tracked wildly expensive rehab plan, with an astronomical 67 million dollar price tag. In this supposed state-of-the-art effort, BLM relied on many of the same post-wildfire measures that had failed miserably in the past to recover grouse habitats. BLM did not yet say how it would deal with post-fire grazing rest so the land could heal.

While seeding some natives, the Soda plan also strews aggressive non-native grasses and other alien species like forage kochia across large areas. For the past 60 years, BLM has used every possible excuse to seed exotic crested or other wheatgrasses and cattle forage plants across the sagebrush biome. This has been a disaster for sage-grouse and native wildlife. These Asian grasses have been developed to be resistant to grazing impacts. Plants are coarse, high in silica, and have fiercely aggressive root systems (and now even the “native” cultivars the USDA has developed often are bred for large size and grazing-resistant characteristics, and are unlike the native ecotypes). They out-compete and prevent the recovery of local ecotype native grasses, and the forbs/wildflowers required by sage-grouse chicks.

BLM used to honestly admit the grasses were for cow chow. Finally, even the western state wildlife agencies, despite being muzzled by the livestock industry, began to complain. So BLM switched messaging. Crested wheat was transformed into a “placeholder” to keep out cheatgrass, a flammable annual, until the agency could get around to replanting natives. The problem is, the long-lived “placeholder” has many characteristics of a weed itself, and takes an extraordinary effort to eradicate, once established. Despite unknown millions of acres already seeded, the agency has never gotten around to removing any significant expanse of it anywhere. Since it tolerates severe grazing impacts, livestock numbers can be maximized. Then, predictably, hoof trampling results in cheatgrass taking hold, providing a volatile mix.

The latest justification is that crested wheat is a “fuelbreak”, and is reluctant to burn. Nature tells a different story. Fires whip through crested wheat under dry conditions. For example, northern Jarbidge BLM lands are almost entirely dominated by crested wheat seedings. In 2010, a fire burned 300,000 acres west to east, an area as large as the Soda Fire, and mostly in three days. Then, only two years later, another fire burned 200,000 acres in the opposite direction – through the same endless seedings.

BLM is also blanketing vast tracts of the Soda lands with herbicides in aerial and ground application. Plateau, a primary chemical being used, inhibits plant seed germination. This means that it prevents native plant seeds in the soil seedbank from germinating, and will also inhibit seeds sown in the very expensive new seedings unless great care in timing of use is taken.

BLM used the Soda Fire as an excuse to propose a host of fuelbreaks that rely on these grasses and forage kochia, a small weedy shrub; herbicided dead zones along many roads; more clearing of western juniper causing further loss of habitat for migratory birds, big game and other wildlife that depend on forested cover; and “targeted grazing”, i.e. dustbowl like grazing in some areas in years to come.

Four Idaho scientists with over 100 years collective experience wrote a letter of concern to BLM, including a sage-grouse expert, renowned botany and biology professors, and the BLM’s own retired state botanist. I attended a BLM meeting on the fire for WildLands Defense, and inquired about the agency reaction to the scientist letter. BLM was dismissive.

These massive seeding efforts that profoundly alter the ecosystem are used instead of keeping cows off the land long enough for recovery to take place.

Now BLM is skirting the clearest and simplest way to control grazing following fires – i.e. go through its regular process of issuing a proposed and final grazing decision. Instead the agency is begging the ranchers to sign “agreements” not to graze for a couple of years, further cutting the public out of the process

The “agreements” won’t be worth the paper they would be printed on, because they contain an immense loophole, allowing the ranchers to pressure BLM behind closed doors. So cows may be turned out even before the minimal rest period is over.

The criteria for “recovery” are minimal, and include a mere three perennial grass plants per meter. The land could still be > 90% bare. There are no criteria for microbiotic crusts, forbs, or even sagebrush, the most crucial plant for sage-grouse — despite BLM spending vast sums on seeding sagebrush and sage plants. The newly minted BLM sage-grouse RMP amendments allow reduced grazing pressure on habitats surrounding unburned lands. BLM claims it doesn’t know enough about the birds in the area to do this.

Still this does not satisfy the insatiable Owyhee ranchers. Having become the beneficiaries of 67 million dollars in seeding and vegetation treatment largesse on public lands (around a million dollars per rancher), plus “disaster” payments, they continue to whine.

During a meeting between Idaho and Oregon BLM officials and local ranchers affected by the fire, the BLM asked ranchers, who used the burned public land to graze cattle, to sign agreements saying they will stay off the land for at least two years. If ranchers did not sign the contracts, the BLM said it could suspend ranchers’ grazing rights.

“We need to get cows out there,” Wilsey said. “Cows will help get the seed in the ground. Just by walking, they dig and create a better land …

$1.80 is more than tax payers get for putting up with a cow and calf, or five sheep and all their lambs, on public lands for an entire month!

Then there is this. BLM kept mum about the fire burning for three hours on private ranch land after a lightning strike hit a haystack. The ranch operation waited three hours to report it. Signe Sather-Blair, a retired BLM biologist, wrote a letter to the Idaho Statesman, exposing an “unbelievable mistake”.

Imagine what would happen if someone in an agency campground waited for three hours before calling in help with a fire that had escaped a fire pit. The next time a “patriot” or politician starts yowling about federal fire “tyranny” a la Bundy and the tales spun about the Hammond’s fire – point them in the direction of the Soda Fire.