Jarbidge to Malheur: the Rough Road to Understanding 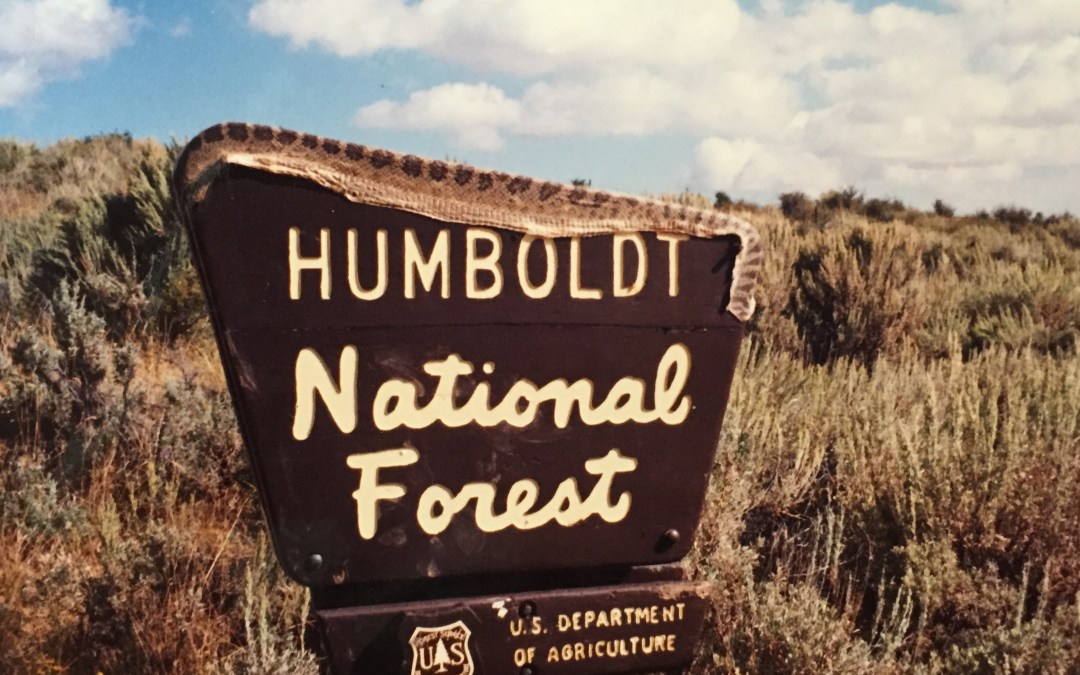 The Jarbidge Road incident took place in the Dark Ages when there was minimal electronic and social media in the West. Elko County, Sagebrush Rebels Grant Gerber, John Carpenter, Demar Dahl and others tied the Forest Service in knots over a washed out road. The incident bears many similarities to Malheur. The same belief systems and elements behind the endless War on public lands run through both.

A 1.5 mile dead end road to a Wilderness trailhead and outhouse washed away in 1995. Wicked weather over the Jarbidge Peaks frequently causes avalanche debris flows and high runoff that sweeps, on the ground away human contrivances downstream. The brouhaha over the road seemed ridiculous from the start. But a no brainer road closure was blown up into a national issue.

The Jarbidge Wilderness, at the divide between the Interior Columbia Basin and Great Basin, was designated in 1964 with the passage of the Wilderness Act. The small Forks of the Jarbidge River combine and drain into the Bruneau, Snake, Columbia and ultimately the Pacific Ocean. Once there were steelhead runs. A small population of bull trout has managed to persist in largely ungrazed Jarbidge headwaters, along with remnant native redband trout. The fish are now isolated by great distances of public lands cattle grazing runoff sediment polluted reaches in the Bruneau, and dams and appalling water quality in the Snake.

Rare fish were the sage-grouse of the 1990s in the Interior Northwest. Bull trout ESA Listing loomed and then happened. After years of indecision and an enviro Appeal, the Forest decided it made no sense to re-build the road.

But common sense and science were not allowed to prevail. The Shovel Brigade materialized to champion County Supremacy, stir up trouble over fish, and beat up on Wilderness. Utah Counties were already hitting the Feds hard, claiming that rights of way across public lands existed for every cow path in their efforts to thwart Wilderness designations. Jarbidge was in the middle of nowhere, a site where the Rebels could control messaging. It provided a springboard for further elevating County Control to the national level. Timing was right to bring it to a head in the summer of 2000 in a pivotal election year.

ATVs and jeeps had been purposefully driving in the river, banging undercarriages on rocks and leaking oil into the water. To prevent this, the Forest Service placed a huge boulder in the middle of the small river to stop the fouling of fish habitat. The Shovel Brigade vowed to remove the boulder and open the road over the 4th of July.

In a stream of news articles, the Shovel Brigade whined about County rights being trampled, access cut off, dastardly fish, government overreach – the whole Rebel drill. Folksy patriotism abounded. Flags fluttered from ATVs. Images of hardscrabble pick and shovel miners were evoked – with props like a mule used to haul a bucket of shit from the cut-off outhouse (which they obsessed over). To the north in Idaho, Helen Chenoweth (who later married Wayne Hage) had long been haranguing the Feds over the ESA and fish – with the infamous quote about canned salmon.

I’ve thought a lot about the Jarbidge Road since Malheur went down. Parallels were everywhere as the events of January 2016 unfolded. The Bundy and Finicum talk of getting the ranchers back to ranching, the loggers back to logging and the miners back to mining. Anti-public lands messaging, taken nearly verbatim out of Wayne Hage’s Storm Over Rangelands book, and plenty of gimmicks to hook the media and keep public attention. Guns were not prominent at Jarbidge. ATVs were the machismo symbol, and the gun obsession was not yet in its current hyper-manic form.

Perhaps the continued disruption of public lands policies could have been nipped in the bud if there had been an active electronic media presence in those days – with people digging into what all was behind the Shovel Brigade, and the Land Grab pack that has been running roughshod over public lands environmental policy for decades.

July 4, 2000 – Boulder Removal, Roaring Through the River, No Consequences for Lawlessness

Susan Tixier and Ginger Harmon founded Great Old Broads for Wilderness. I had met Susan at a SUWA RS 2477 Workshop aimed at explaining the Hoax Highway “virus” that was spreading. When Susan heard that the Shovel Brigade was poised to remove the boulder, she wanted to be there to provide an on the ground environmental voice. We met up with Janet O’Crowley who was living in Murphy Hot Springs at the time (before local rancher hostility pretty much drove her out). We went up the lovely canyon to the wash out, and shook our heads in dismay that anyone would be concerned about closing off this little area. Big Green groups were urging Susan to stay away on the 4th. She ignored them, and organized a group of around 20 folks, largely Great Old Broads, to witness the spectacle of stupidity that the Shovel Brigade was promising on the 4th of July.

The 4th came, redolent with exhaust. The boulder was removed “… hundreds joined a “tug-of-war” line tied to a boulder the protesters dubbed the “Liberty Rock” … Chanting “Freedom, Freedom,” the Shovel Brigade protesters moved the boulder … “That’s known as government waste,” Shovel Brigade President Demar Dahl told the festive gathering as the “honey buckets” were carried to a septic truck”.

The burly crowd burly crowd was amped up by the Fed-bashing speeches about the road, and lamenting the fate of the Outhouse at its washed out end. Vehicles splashed through the little river. An elderly person was displayed in a chair in the back of a pick-up that revved through the water to show how unfair Wilderness was. The Rebels couldn’t stand that the road closure meant the Forces of Nature had won.

“Tixier said just the road’s existence makes her want to cry. The group planned to hold a wake to mourn the environmental loss. They’re making a mess to make a point about the federal government,” she said. “I don’t think the Forest Service is always right, but here they did the right thing closing closing the road”. In an HCN article written in a style downplaying the antics, Susan is quoted as saying it was “the last gasp of the Sagebrush Rebels”.

The Religious Zealotry That We Didn’t Understand

It wasn’t their last gasp. What no one understood was that many of the primary actors in the Jarbidge Road and so much else were driven by religious zealotry, as Chris Zinda’s eye opening writing describes.

Demar Dahl gave a speech at a seminal Theo-con “Freedom” Conference in Utah in 2012 describing how fellow zealots Smith and Grant Gerber were involved in many events aimed at setting back changes in public land policies in the West over the years. The Jarbidge road was extremely useful in holding the Feds back.

our assemblyman John Carpenter said one day to the Press “We’re going to open that road”. And then Grant Gerber who along with Bert Smith has … done as much or more than anyone probably on those kinds of issues – he masterminded this effort that we were going to have to open this road… We stood up to ‘em and because we stood up to ‘em we held them back for a while. But then in 2009 here they come with travel management …

The Shovel Brigade suffered no consequences from the Feds. By mid-2001, the Forest had caved to Elko County. Earthjustice’s Attorney Mike Freeman has battled this Right of Way for 15 years, through endless twists and turns. Nevada Federal Judge Miranda Du just ruledthat the Forest Service had no authority to cede control of the road to Elko County. The County has squandered hundreds of thousands (if not millions by now) of local tax dollars over this Right of Way to Nowhere.

The Movement went on to Bunkerville, Argenta, Malheur. For three decades, a close knit group — Wayne Hage-minded ranchers, corporate and other elements bonded with Mormon zealots, have worked to tear down public lands. The premise of Hage’s manifesto, Storm Over Rangelands, is that “there is no such thing as public lands”. Theo-con financier Bert Smith was in it from the start, and along with others, helped finance Hage’s 1989 book, ALC, and the Storm sessions during and after the Malheur Refuge Seizure. Todd MacFarlane openly thanked Smith in Boise.

The Battle Mountain BLM Argenta allotment rancher resistance to drought protections was fueled by Bunkerville. This was literally Gerber’s last gasp – as he died weeks after an encounter with a prairie dog burrow on a hyped “Grass March” to DC. Argenta remains captured by the welfare ranchers, with BLM leadership using a closed collaborative cabal as cover for its capitulation.

Then, the Hammonds sentencing provided a platform for advancing the Land Seizure agenda, and the Refuge was taken. Long-time operatives and zealots showed up in Malheur, spinning the seizureinto an “occupation”. Sessions in Utah pumped up ranchers to renounce federal grazing permits, a dry run for Boise where Ammon Bundy was to star.

Another operation besides Jarbidge took place in fall 2000. Scofflaw public lands rancher Mary Bulloch’s few dozen cows were ordered off the drought-parched Grand Staircase Escalante Monument. A string of dead husbands had earned her the moniker Bloody Mary, or the Black Widow. Her cows were useful to the zealots for snarling up the Feds. In retrospect, this may have helped stop proposed Monument designations at the end of the Clinton administration – like the vast Monument proposed in the Idaho Owyhee region, only 20 miles north of the Jarbidge Road.

The situation was wildly overblown, and the BLM Manager was baffled:

“I don’t understand it,” monument manager Kate Cannon says. “It shouldn’t have gone this far. It has become a line in the sand.”

Shawna Cox and Kanosh Attorney Todd MacFarlane were in the thick of it.

MacFarlane related his talk with the Sevier County attorney highlighting a case he claimed showed that the federal government had no “constitutional authority to impart orders to a County sheriff” when Bulloch’s cows were held at a sale yard in Sevier. The Livestock Weekly reported: “Auction officials in Salina had refused to sell the animals, and the government was preparing to move them to another auction when about eight ranchers, flanked by their attorneys and local law enforcement officers, took the cattle”.

The U.S. Attorney threatened charges over the Vigilante action: “The discussion now focuses on what the U.S. attorney’s office terms vigilantism in the taking of cattle from the Salina auction house. Vigilantism can’t be allowed to stand, she added”.

It seems like it did. Deal-making began, and the trespass cow issue entered BLM’s byzantine Appeals system. The unnamed the attorneys, “law enforcement” and ranchers were not prosecuted for taking the cattle. Bulloch and other ranchers whose cows were involved paid a fraction of the trespass fees. The nature the trespass was changed from “willful” to “non-willful”, a major difference since BLM grazing permits can be revoked for willful trespass. Activist Mike Hudak documented the damage to the Monument, on the ground.

We used the term “Sagebrush Rebellion” for a Movement of combined factions. We did not grasp that many of the main actors were driven by deep beliefs aimed at achieving domination of the public land as a step to realizing an Empire of Deseret. Malheur opened the door on this, and Chris Zinda’s articles have explained the underlying fundamental beliefs in depth.

The events of the past 30 years on public lands in the West need to be examined with this knowledge in mind and thoughtfully considered in writing accurate historical accounts. Though the Malheur trial is just about to begin, and Bunkerville is months away, there are already many attempts to re-write or gloss over what took place. Theo-con operatives are trying to re-invent themselves, and confuse us, so that the Rebellion can continue.