Elkhorn Creek, downstream of the Loper Exclosure, is located in the Challis BLM Donkey Hills Area of Critical Environmental Concern.

Elkhorn Creek is a tributary to Burnt Creek, an occupied bull trout stream. It is treated as a sacrifice area to grossly over-stocked cattle herds run by abusive livestock permittees.

The sagebrush is battered by livestock, significantly reducing cover and nesting sites for sage-grouse and migratory birds across much of the upland area. Extreme levels of livestock trampling cause the stream channel to become shallow and wide, and dry out entirely in late summer at the downstream end. Such abusive grazing fast forwards climate change processes, and is leading to permanent loss of flows in headwater streams across this region. The water has a vile chemical smell from the extreme concentration of livestock waste. All of this will flush down into bull trout waters during spring runoff.

Challis BLM routinely allows these levels of grazing abuse on grazed streams in the Donkey Hills and surrounding public lands. BLM has never conducted a Rangeland Health Assessment on this area, and year after year makes excuses for the permittees when the public reports this type of conditions. See also our Report on the Loper Memorial Wildlife Exclosure also in the Donkey Hills. 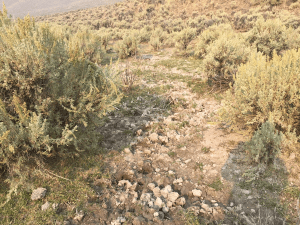 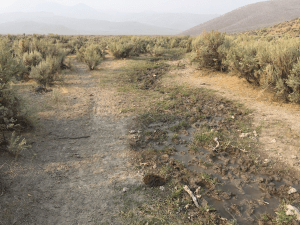 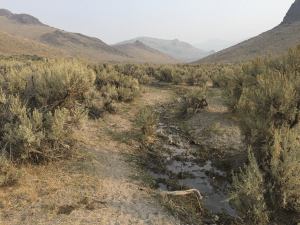 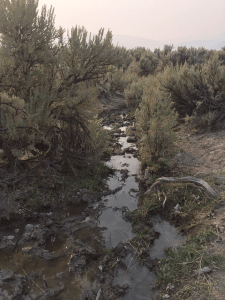 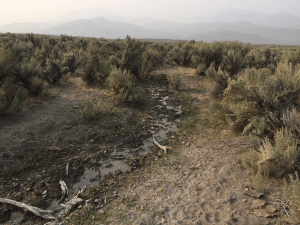 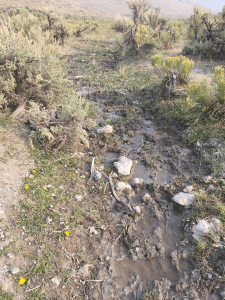